Ice Age: Collision Course - the Crazy the kids will love 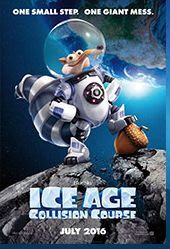 Ice Age Collision Course is the fifth instalment in the series. Can they dream up any more crazy? Yes, they do! Luckily we love animated movies just as much as Little Miss.

The plot is crazy!


While trying to bury his acorn, Scrat accidentally activates an abandoned alien ship that takes him into deep space, where he unwillingly sends several asteroids en route of collision with Earth. Meanwhile, Manny is worried about the imminent marriage between Peaches and her fiancé, Julian, while Sid is dumped by his girlfriend, Francine, just as he is about to propose to her. During Manny and Ellie's wedding anniversary party, some of the asteroids strike the place and the Herd barely escape with their lives. Meanwhile at the underground, Buck fights a trio of Dromaeosaurs to return a dinosaur egg to its mother and later discovers an ancient stone monument, which he takes to the surface, where he meets Manny and the others...

All the enjoyable characters are back from Ice Age Continental Drift (2012), including Sid, a ground sloth and his "Aunty Acid" granny!

There were some activations at Imax cinemas at a number of Ster Kinekor cinemas this past weekend. We only found the Ice sculpture, face painting and colouring stations after the movie at The Zone in Rosebank... (It was not on the same level.)

Little Miss had a ball! 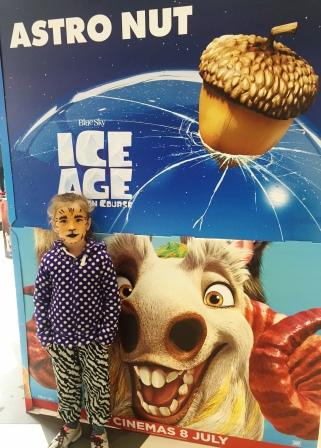 Ice Age Collision Course is well worth the movies!


Disclaimer: We got tickets to attend the movie!
Posted by Karen du Toit