We really do some stuff on a weekend - for future reference! 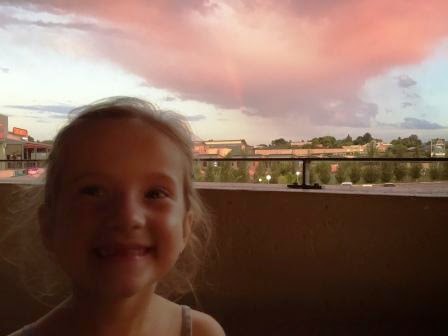 Little Miss has to do a weekend report picture after each weekend of the stuff we did. We have only seen her books from school on two occasions when it got sent home. Both times her pictures of the weekend reports came back very dull.

Week after week it is only a picture of herself with sometimes a tree, and sometimes with a small dog.
Her answer is that she forgets when I try to recount of all the things we did!

Why do we even bother to go out of the house?
And most of the things we do for her!

This past weekend had a birthday focus (mine), but she could have reported the following:

- Her Big Sister was home for the weekend. She loves having her around, and spending time with her!

- Big Sister made her a t-shirt headband and bracelet, and she also could help her with it.

-  We had a breakfast outing at Urban Angel Cafe (love the place!) on Saturday with friends of mine and she could choose anything from the stand. (She loves that more than ordering from the menu.) She had a pie and a cake!

- Dad took her to the gymnastics which she loves!

- She played "tennis in our garage" with Mom and Dad in the afternoon while waiting for Mom's friends to arrive.

- She also got to ride her scooter, which she loves more than her bicycle. Dad had to tag along, of course!

- She could watch a children's movie while we were having a braai.

- Her grandmother and grandfather visited on Sunday, with aunt Deb and uncle Leon. She always loves seeing them.

- Her uncle Leon played some ball with her.

- The neighbour's kids came to jump with her on her trampoline.(Big Plus for the Sunday!)

- She scored a R10 from the family, and she immediately had to spend it at the petrol garage when we dropped the Student off on Sunday afternoon!


She could not remember to include any of this in her report?
Next Monday we will be reminding her of all  the highlights of the weekend, especially since we are going camping with her.


Photo: I tried to get the rainbow on the photo in the background. Not that successful!
Posted by Karen du Toit