Clover Little Big Cook Off launches for a second season, and meeting a Mama Afrika 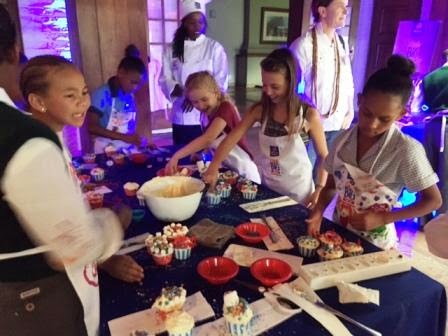 I was invited to the launch of the new season of Clover Little Big Cook Off at the Longmeadow Piano Lounge and Restaurant at Montecasino Boulevard.

The Clover LBCO was such a huge success last year that they are planning to build on the winning recipe of last year!

The new season will air from June 2015 and include another 13 main episodes with celebrity chef judges Martin Kobald and Coco Reinarhz and fellow judge and host of the show Zuraida Jardine. The show will be on SABC 3 at 16:30 on a Sunday. Entries for Season 2, as well as daily cash prizes will open on 15 January 2015.

All you have to do to win a daily cash prize of R1000 is to buy two Clover products.

The show features parent and child teams competing a-la Masterchef style. Zuraida Jardine spoke about how valuable the interaction between parents and their children are when participating in a cooking process, and not only on the television show, but at home as well!

It was a lot of fun for some of the children yesterday making cupcakes, and painting their aprons.


I was impressed to hear about the Mama Afrika project. Mama Shirley was there with some of her kids and to say thanks for the empowerment the project has given them.


Clover has been running the Clover Mama Afrika project for over 10 years. It follows the spirit of Ubuntu – ‘I am who I am because of who we all are’ – and upholds the values of community, growth and mutual support. The ‘Mamas’ make up the heart of the programme and they pass on their learnings to care for the most vulnerable members of society such as orphaned and abused children, those impacted by HIV/Aids and the elderly.
“The Clover Mama Afrika programme teaches the Mamas relevant and useful skills who in turn transfer these skills to fellow community members.” says Sherian King, marketing manager for Dairy at Clover. “As of December 2014 we had 40 Mamas caring for over 15, 500 children collectively and more than 2 500 elderly. It is a remarkable success and one that we are incredibly proud of.”
The Mamas and their families learn about the importance of cooking and making food together in theirdaily activities. Adults and children alike learn about the nutritional values of food while learning to make bread, a staple ingredient in their mealtimes, as well as other great baked goodies. Each Mama learns how to make other nutritional meals to keep her families healthy and happy, with fresh ingredients pulled straight from their food gardens. The self-sustaining Clover Mama Afrikacommunity is taught to grow their own food in their food gardens, as well as other basic life skills including, sewing, quilting, flower arrangement, hairdressing, crocheting, beadwork, art, basic first aid and how to manage finances. All activities bring the community not only intellectual wealth, but also financial as each activity can bring income into the centres.

Clover is also to release the new The Clover Little Big Cook Off Recipe Book, with recipes from Season 1, tips and hints in how to make cooking easier and making the most out of Clover's products. I got one of these! (Very nice and easy recipes !)

A Cook with Clover app is also going to be launched very soon:


"It will be an interactive space for consumers to search for new recipes, build shopping lists for desired meals and share favourite recipes with friends and family."