It was an anxious week before the time. We were counting the days, but not because of excitement, but because of trepidation...

Little Missy was extremely scared of having her tooth fixed. We got a small calming pill to give her an hour before the time. And told her that she would be sleepy and not feel a thing. (Thumbs crossed)
She told us time and time again that she was scared, and that she did not want to go. It took a lot of convincing. I don't like them having to get anaesthesia for only one tooth!

I was so glad we did! Dentist Chantelle fixed her tooth without an injection. Little Missy was a lot calmer when the pill kicked in, but kept on telling us that she is not sleeping!

The dentist recommended ice-cream as reward. (Strange, but true!) 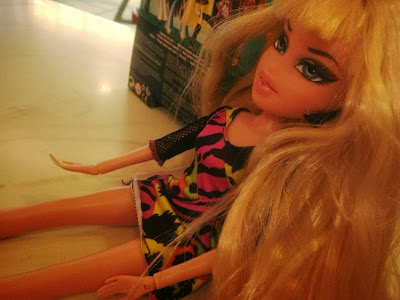 And she got a new Bratz doll that we promised.

I am very proud of Little Missy for being brave and not freaking out, although she felt like it!

It is a huge milestone since her first visit to the dentist where the dentist could only do a quick peek in her mouth until the fourth time where she finally had a proper check-up!