Hello and goodbye are not part of the vocabulary 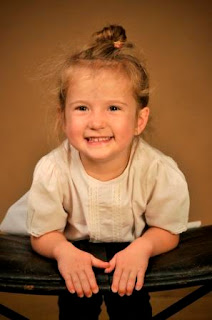 At four and a half it should not be difficult to greet people? To say hello and goodbye should be normal behaviour without being prompted?

Not so to Little Missy!

She does not greet people, not even when threatened prompted!
She just stares at them.

I have spoken to her many times about it.
At first she said she was shy, and that she does not know the people. (But she also does not even greet people she knows.)
Then she said that I spoke too softly, and she did not hear when I told her to greet the people.

Her excuse yesterday was that she had forgotten. (I had reminded her just before the time she had to greet the person.)
"I am small, and small people forget!"
"You should not be worried! Okay!" (Her exact words.)

I have been greeting people on her behalf, and hoped that it would have made the difference.

She is able to talk to people she does not know very well, but refuses to greet them.

Some people feel offended when they greet her, and she does not respond! Asking me if there is something wrong. Like the cashiers in the shops, or the people at work....

Maybe it is a personality trait? Something to do with being shy?

How do you get a little one to greet other people?
We always greet people, and I make a point to greet people on her behalf.