The toddler is not hitting other babies anymore 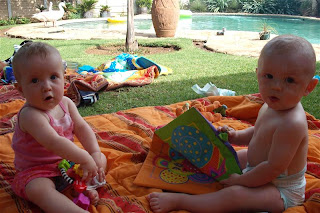 A while back we were worried about the baby hitting other babies. We saw the disturbing behaviour while she was “playing” with a friend.
But yesterday Mieka was happily playing alongside her friend Zander . They both complained a bit when the other one had a play thing in their hands they also wanted to have. But it was not a major upheaval in the baby politics. (Take that for worrying about the little things – most of it get sorted by themselves!)
It was another day in paradise, enjoyed with friends in Potchefstroom in South Africa.
Really awful times! (Evil grin)
Posted by Karen du Toit